Google is known to offer surprises! And this around it is the launching of the new version Android P that is making the headline. Yes, Google has already revealed the first developer preview of Android P with a number of new advanced and exciting features.

In addition, it has made some noteworthy changes too, which are very crucial from an app developer’s perspective. The developers can download the initial version of Android P for the Pixel models.

Now if one compares Android P with Nougat or Android Oreo, the design changes are relatively smaller. Another vital information is that Google has informed the developers that they need to download the new version using a secondary device.

Therefore, let’s throw some substantial light on its vital features and then discuss the major changes that are important from a developer’s point of view.

1. The Wi-Fi RTT Gets Interior Positioning

Often Google faced problems related to appropriate interior positioning, which is linked with geo-location services. However, the new Android P has tried to address that issue, supporting the IEEE 802.11mc Wi-Fi protocol. This has been also referred to as Wi-Fi Round-Trip-Time (RTT). It is a useful asset that helps in indoor positioning of the apps.

Now with this wonderful feature in your bag, it will be much easier for the location based apps to get an access to the nearest Wi-Fi connection with the help of RTT APIs. And there is no need to connect the device with APs in order to access RTT. So, this will ensure the privacy of the user as your device will become capable of measuring the distance of nearby Wi-Fi.

Now only three or more APs will be able to measure the exact distance within the range of one or two meters. This will provide a new dimension to the navigation development and controls.

The notification cards in Android P have been given rounded corners that precisely matches with the aesthetic beauty of the app. A single line is separating one notification from the other. You would also come across new layouts with addition of contact images and profile pictures. 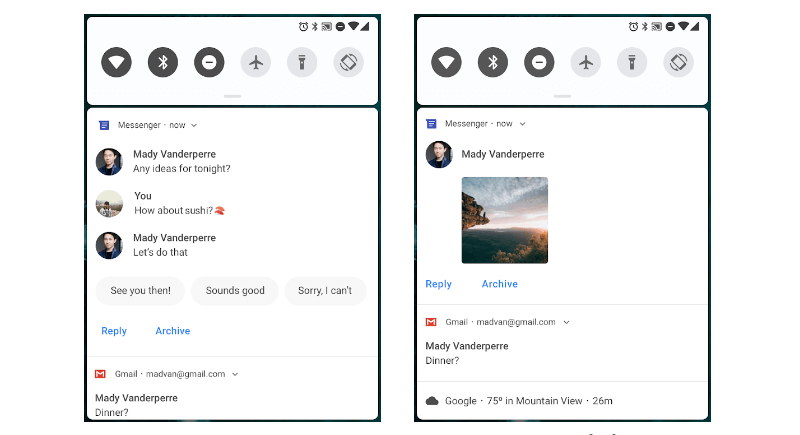 If we talk about the experience of messaging, then there is so much improvement there. While responding to a message, a user will be able to add action and even add other text directly from the notification. The new version lends its support to the images, exhibiting it on the messaging notification of your Smartphone. Apart from that, one other addition is that of new Notification.Person class, which helps in identifying the people who are involved in the interaction.

The new Android P also allows you to save the replies as drafts that are sent by the system if the user unintentionally closes the messaging notification. And wait, this is not all. Some other features include getting to know if it is a group conversation, setting the semantic action, which means marking the messages as read, unread, important ones and deleting. Android P also advocates the feature of smart reply wherein you can store the important replies in the messaging app.

Over the past few years the trends have changed and we are witnessing smartphones with more than one or two cameras. So, the Google has also planned that it would lend its support to multi cameras with the Android P preview. Having said that the user can stream simultaneously with two or more cameras with the help of API creating fused camera. It offers you a number of advantages such as zooming the lens, bokeh, and stereo vision.

Another significant development in the camera portion is the introduction of Session parameters that reduces the delay in taking pictures. The APIs also support the flash that lets you access the OIS timestamps for app-level image, generating the special effects and getting the stabilization.

4. The Option of Display Cutout Support

Now that Android P is on the carpet, you can get the advanced feature of Display cutout support, which brings the cutting edge latest and full screen content as well as display cutout for camera and the speaker. This is one feature that lets you manage your content accordingly and helps in determining the location and shape of non-functional areas.

In addition to that, the display cutout support can prove its worth when you have to adjust the height of the status bar and segregate content from cutout. In fact, you can make use of the getDisplayCutout () to find the location and shape of the cutout. Android P has also made an addition of the layoutInDisplayCutoutMode, a new window layout attribute determining when and how to display content around the cutout area.

The Android app developers have the support of Developer Option enabling them to develop and test a cutout for any device. You will have to test your apps with display output to make sure that content is displayed appropriately.

Android P has introduced a new virtual screenshot editor, which is also referred to as the Markup. This feature is similar to what you find in iOS 11. The users can now crop and draw on the screenshot and basically if you love to show your creativity on the images, you would simply love it! You can edit, crop, rotate and add colors to draw the pictures.

The new built-in Markup screenshot editor fully supports the shortcut and allows you to edit the screenshot notification with only one tap of the finger. You get the markup for areas that you want to save and share on the social media platforms.

6. The Do not Disturb Option

It is sure that most users will like this feature. In the previous versions, we have seen that if you don’t want to get disturbed, you put your phone on the silent mode or Flight mode. However, the good news is that Android P has removed all those old options and introduced the Do not Disturb (DND) alternative. 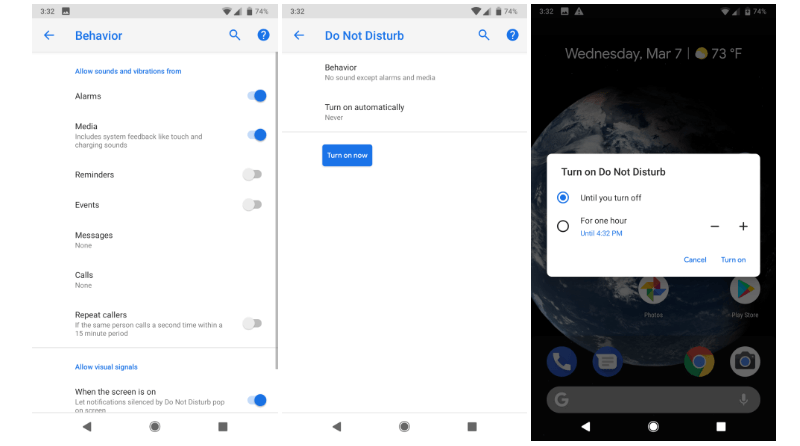 The Do not Disturb will be available within the sound settings under the Behavior menu. You can set your own preferences, whether or not you want to receive the calls or use the repeat caller option. The feature also involves the pop up option as quick settings cannot be expanded.

7. Images Can be Decoded Easily for Bitmaps

Now, it is much easier to decode images for the bitmaps and drawables, all thanks to Android P for bringing the ImageDecoder feature that denounces BitmapFactory. You can draw a bitmap or drawable using a byte buffer file or URI. It offers you accurate scaling and decrypting the hardware with only one step. You can even postpone the decoding if you want to. However, all these advantages were absent in BitmapFactory.

8. The Feature Related to Animation

9. Scheduling your Tasks with JobScheduler

Well, having the JobScheduler feature in your kitty gives you the advantage of managing the scheduled jobs and working at Doze, App Standby, and Background Limits changes. The users will find it easier to tackle network related tasks in Android P as the coordination is better with the network signals.

In fact, the jobs can set their own preferred criteria related to size of the data, signal preferences and setting the own network. The main function of JobScheduler then is managing the tasks according to strength of the network.

The Android P also provides the luxury of in-built support for HDR VP9 Profile 2 HEIF image and Media APIs. If you love to watch movies or videos you can do so with the High Dynamic Range (HDR) and access it (videos) from various sources.

Apart from that you also will come across the HEIF, which is a popular format for images and helps in to compress the files. It allows you to save storage and network data. You can easily send the HEIF images using the backend server. In addition, the other popular image formats such as jpeg can also be converted to HEIF with the help of ImageDecoder or BitmapFactory. Alternatively, the HeifWriter helps to write HEIF still images with new Support Library from bitmap, byte buffer etc.

11. What about the Autofill Framework

Improvements in the Autofill framework has been introduced based on the feedback and suggestions from the users. The new autofill simplifies the task of filling out the forms and initially we saw its debut during the launch of Android 8.0. Google has tried to fix the bugs and also has brought new APIs to enhance the autofill experience. You get more options including input sanitization, compatibility mode and dataset filtering.

The Neural Networks API was first introduced during the release of Android 8.1 and its key role is to speed up the on-device machine. Google has brought in further improvements in this feature and has added the support for nine new ops.

Google faced complaints about security issues and so when Android P is making its debut, it is committed to offer robust security feature with fingerprint authentication for apps and devices. The user has to touch the fingerprint sensor for managing and positioning the text.

The system fingerprint dialog can be accelerated with FingerprintDialog API. So, start using the new system without any delay. The Network Security Configuration will assist in blocking the all cleartext traffic.

14. Some other Important Security Measures

The addition of GlobalPlatform Open Mobile API has been a big boost for the Android P as it allows you to open the mobile API for conducting NFC payments and also providing security to the transactions.  Thus, paying through the smart cards will be become securer.

In order to offer better user privacy, restrictions have been imposed on use mic, camera and all sensors from apps that are not used frequently. However, it is expected that these limitations will not create any issue to the existing apps.

Some other Vital Features Introduced in Android P

Android P also introduces some other pivotal features which are important to focus on. We can discuss them in brief:

The app developers have to get familiar with Android P very carefully and study each of its vital features in detail before implementing the required changes.

Google has introduced the Android P Developer Preview with a hope that it would become popular amongst the users. A number of significant changes have been made from the previous versions. As for the information, developers having Pixel, Pixel XL, Pixel 2, and Pixel 2 XL have been asked to download the preview version.

In addition to that, they also need to install an emulator on the computer. The Android P as of now is able accessible and available to developers only and not for common users.