Ah! The autumn has arrived and as we are preparing to bid adieu to 2018, what could have been better to receive such wonderful and exciting news from Google. We are quite aware that there’s always a rat and mouse race between Google and Apple, so, it was confirmed that Google wouldn’t lack behind in the competition for a long time.

And as highly expected, Google also occupied the center stage yesterday at the Google’s Pixel Event, to make some of the most vital announcements related to launching of a series of highly advanced gadgets.

This event became even more significant as Apple had made the announcements regarding the new iPhone models a month ago and so it was Google’s turn down to steal the show. So, tech experts, the Google phone enthusiasts, and Android app developers from worldwide had all their eyes fixed on the event; all curious to know what’s the surprise before the Christmas and New Year.

However, the experts believe that there wasn’t any big surprise at all. The reason being that Pixel 3 and Pixel 3 XL has already received a number of reviews beforehand as it’s shipment of prototype was stolen and sold on the black market. Anyways, whatever be the situation, we are here to review each of the gadgets and hardware devices that Google announced in its event.

Google announced about the launch of Pixel 3, which would precisely be available in two variants. The smaller version would have a screen size of about 5.5 inches, while Pixel 3 XL will have a larger screen of 6.3 inches including bigger battery. 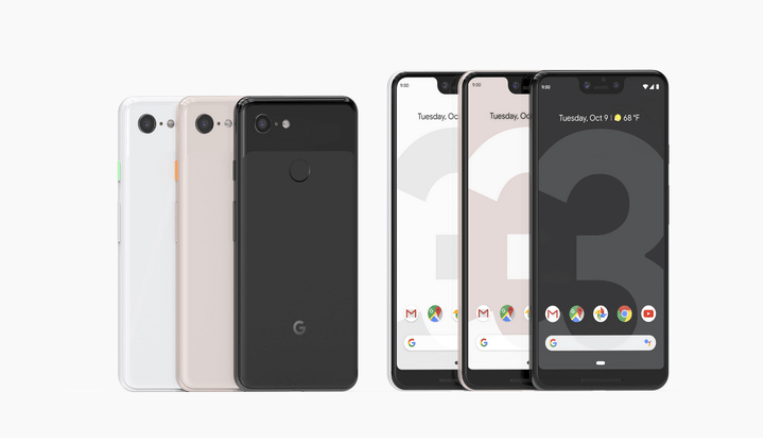 The battery capacity of Pixel 3 is 2195 mAH while for XL version its 3430mAH. However, the camera features in both the Smarphones remain the same with the dual-lens megapixel selfie that offers about 184% more width in comparison to the conventional front facing cameras.

Another notable feature is that both phones support wireless charging facility because of the presence of glass backs. In order to make the models more attention-grabbing, both models have been provided with Google’s signature design, the top part of glass on the back is glossy while the rest is matte with some sort of soft touch finish. They are resistant to fingerprints and have improved glass quality when comparing with other phones.

In fact, both have been further integrated with higher technologies such as Artificial Intelligence (AI) and Machine Learning. AI will help to know which calls is spam and flip to shush will shut down the notifications when the phone’s face is turned down.

One of the unique new features added to the list is ‘Top Shot’ that keeps on capturing the frames before and after taking the shots. If you are not able to get the best frame or your picture is hazy don’t worry. Google will help you out in selecting the best frame. If you want to take-in zoomed photos, there is the Super Res Zoom to offer the services. Using this you can take quality zoomed-in photos as it combines phone and software.

As far as the price is concerned, the cost of Pixel 3 starts at $799 and Pixel 3 XL is available at a price of $899 for the 64 GB model. You have three color variants to pick including Just Black, Clearly White, and Not Pink. If you want to buy the dock as well you have pay $79. Both the models can be pre-booked in a week’s time i.e. from 18th October.

Google wanted to enhance the experience of Google Home smart speakers that was launched about a couple of years ago. The Hub is a smart speaker that can be controlled by your voice with a 7 inch long touch-screen display. We have seen the voice-controlled speaker previously in other devices including that from Amazon, Facebook and Lenovo. 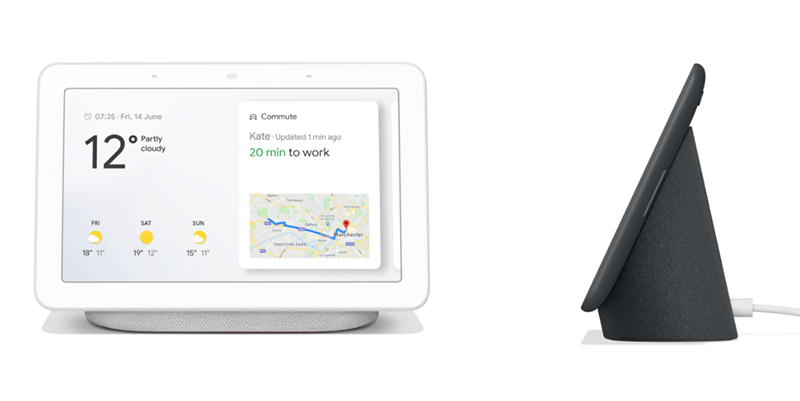 In fact, the Google Home Hub can also control other devices as well that care connected with internet, offering you better experience with answering the questions and displaying the Google Photos and YouTube on screen.

The device has got a sleek designed covered with fabric and hidden enclosures if seen from the front. Google Assistant steals the attention yet again and offers great experience after combining with Google Maps and YouTube.

For instance, if you want to try a recipe, Google Assistant will start speaking a step by step recipe with photos or video of that. Plus, there’s an exciting offer for the customers. If you buy the device before the end of 2018, you get YouTube Premium videos free of cost. Wow! An irrefutable deal so, grab soon.

Another prominent feature is that Google Hub does not have any camera; so be rest assured; no one would act peeping tom in your private moments. Even though it does not have camera, but you can go with Nest Cams that allow you to take an entire access of Nest Cam feeds at the home with the help of Home View feature.

It also allows you to take control over other Nest devices like Nest Learning Thermostat, and Google’s updated Google Home app. The Google Home Hub can certainly play the role of a digital photo frame when not in use. It filters and removes the blurred images, putting the best ones.

The cost of Google Home Hub stands at $149 and the booking in advance would commence from the 22nd of October.

The Pixel Slate Tablet can be an advanced version of the Pixelbook chromebook, which Google had launched previously. Today, at the event Google announced about the new smart tablet that runs on the Chrome OS. It can play dual role; both as a tablet or a laptop. 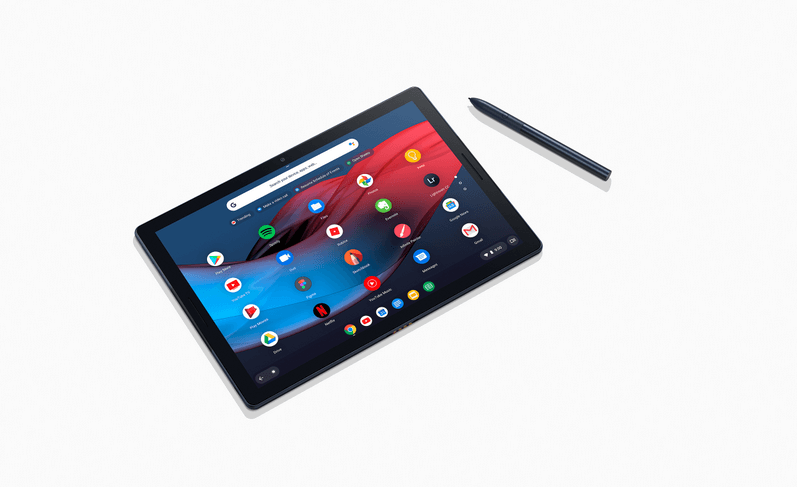 The device has been given a sleek and beautiful display design. It supports the pixel density of about 293 ppi, increasing the experience so user would fall in love with it.

Even the sound system of the device has been much improved with dual front facing speakers offering stereo sound. The sound gets extracted in front and not downwards or sideways. The camera quality has also been updated with 8 MP rear facing camera with dual wide angle lenses.

Although the User Interface of the device is best suitable for using as a tablet, but you can utilize it would also perform all the functions of desktop as well. Enjoy the facility of multiple tasks with split screen with the additional benefit of Google Assistant for further support.

If you attach the keyword, the Pixel Slate turns into a laptop with the availability of backlit keyboard and trackpad. You don’t need to change any battery for attaching the keyword and there’s no problem of pairing as well. You can even tilt the display to the angle of your convenience.

Like the other two devices, Google has given the best deal that includes 3 months of free YouTube TV subscription. Regarding the price, it’s about $599. If you want to also own the Pixel Slate Keyboard, pay $199 for it. There’s also a Google Pixel Pen, which cost around $99.

We expect that both Google Pixel State and the Pixel Slate Keyboard would be available before the end of the year.

Although Google did not make any official announcement at yesterday’s Pixel event about the New Chromecast, but it was also included in the list. There has not been any major change from the earlier versions expect for a subtle design alteration.

The cost also hasn’t changed and it’s still priced at $35 with the support for 1080p streaming. The Ultra version of the Chromecast costs $69 with support for HDR streaming and dealing with 4k. The new Chromecast is better with quicker 5 GHz WI-Fi networks. It also has been provided with a new matte finish.

Google had launched the Google Duplex, the human sounding robot at its I/O conference this year. Now Google has given it the band of colors. As such, the company informed that the AI tool can be now accessed with the help of Pixel 3 phone phones in four cities towards the end of the year.

Google Duplex will be assisting as a bot, supporting you in making automated reservations at restaurants. In fact, it can be seen as a future of the Google Assistant.

The Google Duplex can be a big bonus and reason why people would be highly interested in purchasing the two Pixel model phones.

Google has taken a giant strike forward and announced about some of the highly advanced devices that they expect would receive a positive response from the users. However, it’s beyond any doubt that these devices will amplify the experience of the customers. So, you can start placing your orders in advance and become owners of the best future trending gadgets.