The Apple’s World Wide Developers Conference (WWDC) 2018 mega event was concluded recently at San Jose California about few days ago. We all know that Apple maximizes the opportunity of WWDC to launch its next advanced version of the iOS and this year too, the story was no different. This year Apple unveiled the new version iOS 12 along with a number of other updates and gadgets.

So, without wasting any further minute, let’s get down to the main course of discussion – iOS 12. We will be shedding the details of all important features that you would come across when you update your iPhone to this new version.

Enhancing the Speed and Performance of the OS

Apple CEO Tim Cook during his address at the WWDC keynote specifically emphasized on the fact that Apple is committed to providing an enhanced and faster performance of the Operating System to its valued users. Thus, the iOS 12 offers you:

Moreover, the apps will become more responsive with an improved experience. Now, you can do the usual things such as operating the camera or typing with the keyword at a much quicker pace. And to tell you more, the latest improvements in camera and typing speed can be accessed on all devices as old as iPhone 5S and iPad Air.

Changes in the ARKit

The iOS 12 has made one of the significant changes in the ARKit. The Augmented Reality has got so real that you can share it with your friends. ARKit is a tool that would create an immersive augmented reality experience to the devices. 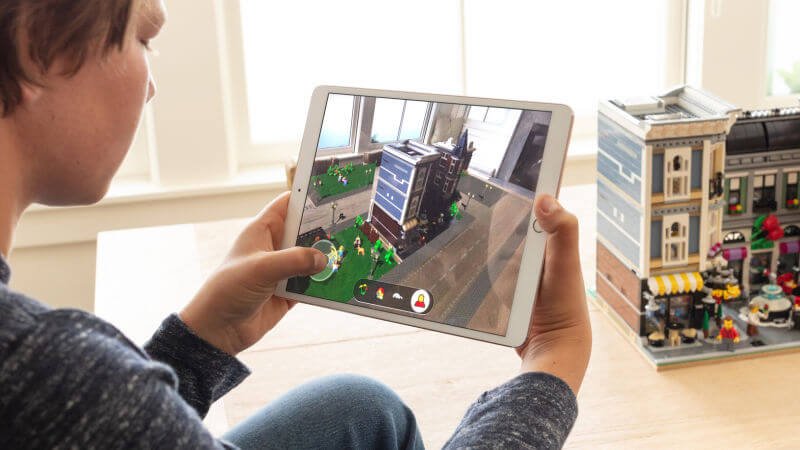 The iOS developers would find it relatively easier to bring the AR experience through the placement of virtual objects into the environment. And for better analysis of the iPhone or iPad surroundings, ARKit makes use of the details from motion sensors and data of the camera.

What’s important to note is the fact that you can send the augmented reality objects along with the messages and email to be viewed in the real world. In addition, you would also find a new AR app, which is known as the Measure helping to measure the real-world objects just by pointing the camera at them.

FaceTime with up to 32 Persons Simultaneously

The good news out from the center is that Apple’s FaceTime will now be supporting the audios and videos with up to 32 individuals simultaneously. In fact, the tile of the person speaking during the conversation would automatically go larger so that the track of the communication is not lost. 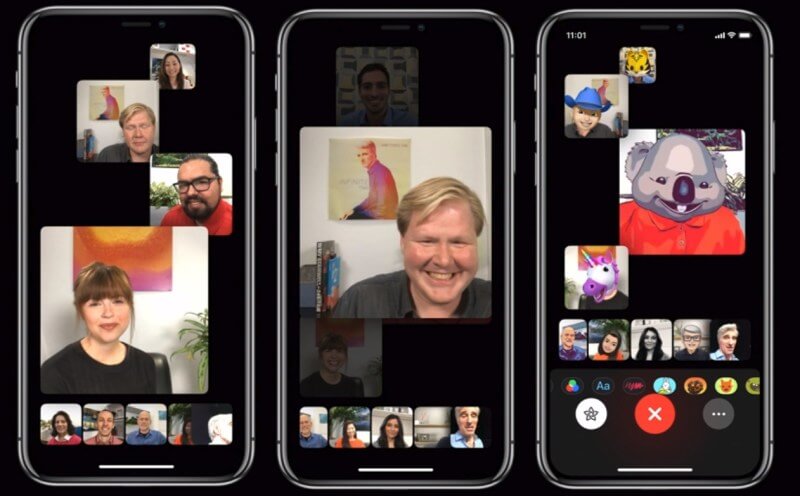 The user will be able to start the Group FaceTime right directly using the group thread in Messages or join the conversation anytime.

Create an Animoji for Self

The iOS 12 has also introduced another exciting and fun laden feature Memoji where the user can create his own Animoji for himself. This interesting feature allows you to create your own hairstyles, change the color of skin tone, the color of the hairs, headwear, and eyewear etc. Therefore, in short, you can change the Animoji according to your personality and mood.

Besides that, Apple has also allowed its users to make use of as many alter egos as possible, which can be implied in the Messages and FaceTime. As of now this feature is only available to the iPhone X users but will support more devices in the future.

Well, this is not over yet. With an aim to offer more fun and excitement, Apple, has introduced four new Animoji including Koala, Tiger, Ghost, and T-Rex. You can also make funny faces such as winking the eye or sticking out your tongue as Animoji has been provided with more expressions.

The new version iOS 12 has also brought a solution for people who are too much phone addicted. Moreover, parents who want to have a check on how their kids are using the devices and how much time they are spending will surely appreciate the new feature Screen Time. 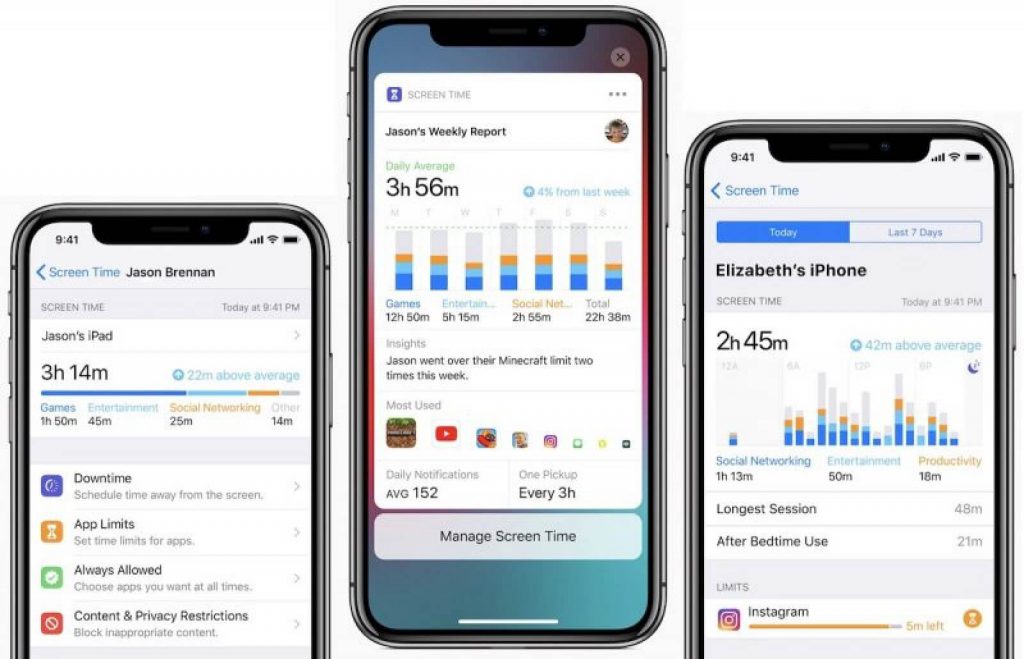 In fact, you would also know what kind of games your children are playing and what websites are they browsing. But the most important aspect is that you can restrict the time you and kids spend on phone navigation.

The Screen Time displays the entire activity of the week along with the app usage. It will also inform about your frequency of using the phone and which apps send the most number of notifications. You can set the time limit for which your kids will be accessing the phone and apps with the help of family Apple ID.

Liven up the Conversations

So, you have another very exciting feature coming up known as the Liven up the Conversations. It has been added into the Messages and FaceTime and can be used with the in-app camera. It allows users to instantly share the videos and the photos along with the filters and text effects, Animoji and stickers etc.

The filter options include watercolor, black and white and comic book. Besides, the test effects include speech bubbles. You can also go with different shapes such as starts, hearts and arrows.

Taking a Control on the Notifications

As Screen Time helps in restricting the amount of phone usage, similarly, you can also take control on the notifications and manage it accordingly. Often, the notification from various apps seems to be irritating and annoying and iOS 12 has initiated a feature that will help in reducing such hindrances all throughout the day. 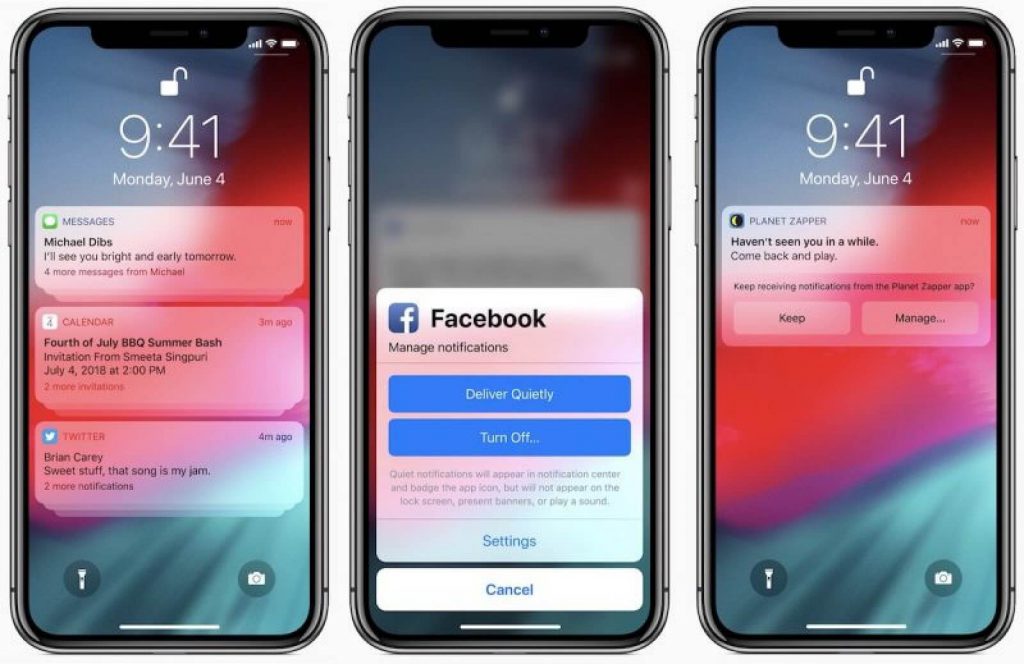 It allows the users to manage the notifications directly from the Lock Screen and as such it can be sent to the Notification Center or even turn them off all in all. Siri also plays an important role in making suggestions about such notifications based on how the user treats then on priority level. Since message threads and notifications are grouped together, you can view what’s more important.

Introducing the Do not Disturb Feature

We talked earlier how you can control the app notifications that keep on interrupting most of the time. However, now we would discuss about the new ‘Do not Disturb’ feature in the iOS 12, which simply means you don’t want to be bothered.

You have various options here such as do not disturb for an hour or with a particular time like ‘until this evening or 8 p.m. etc. There is also the option of location based do not disturb. You just have to turn it off until you are attending an important business meeting or event.

Similarly, when you retire to bed at night, you can use the Do Not Disturb Bedtime option. It will fade the display of phone and put it on silent mode until it gets unlocked next day.

For you Tab allows to Share the Best Photos

Enhance your photo sharing experience with the new feature For You tab that showcases the memorable moments from the photo library and also makes a suggestion to share the photos with your friends and close acquaintances.

Coincidentally, if the receiver also is using the same version iOS 12, they can also share the photos from the same event with you.

Now you can find your photos in a more smart way with the help of the search suggestions. You would come across the exact photo that you were probably looking for or search a picture that you forget.

You will get an access to the recent events, locations, people etc, through suggestions even when you have not typed anything. However, by typing you get a more accurate result.

Siri Gets Even More Intelligent

In iOS 12, the Siri has got more intelligent as it can smartly manage your daily routine with the help of third-party apps to set up a schedule. Well, this is the Shortcut feature that has been designed to streamline the things you do often.

For instance, if you book a cab for reaching the office, Siri will make the suggestion to book the taxi with the app from the Lock Screen after realizing your daily routine. You can also create a shortcut using your voice with Shortcuts app.

We are all aware how particular and strict Apple is regarding the security concerns and app publications. Now, with iOS 12 on the roll, the privacy and security is getting better as Apple believes that it is a fundamental human right.

The iOS versions always have the built-in encryption, on-device intelligence etc. that allows the user to share what he only desires. In this new version, the Safari will provide an additional security by preventing the Share buttons and comment widgets to track your data without your consent.

Some other Important Features in Brief

So, we have evidently seen that with the launch of iOS 12 version, Apple has introduced many new and amazing features that will hike the experiences of the users on the whole. Moreover, many of the things have also been simplified from the developer’s perspective as well.