Today Laravel has been identified as the optimal PHP based framework, which helps in creating outstanding customized web applications. It follows the Model View Controller (MVC) architectural pattern. What’s interesting to note is that although Laravel was initiated in 2011, it has succeeded in outshining its competitors such as Symfony or CakePHP and as such it tops the list of best PHP based frameworks in 2017.

In fact, Sitepoint conducted a survey in around fifty countries worldwide and most of the nations voted for Laravel. This is because it is equipped with a number of rewarding features including simplified usage, large ecosystem with on the spot hosting and development platform. Another data suggests that it nearly powers about 20 million web domains and this figure is hiking with each passing day. 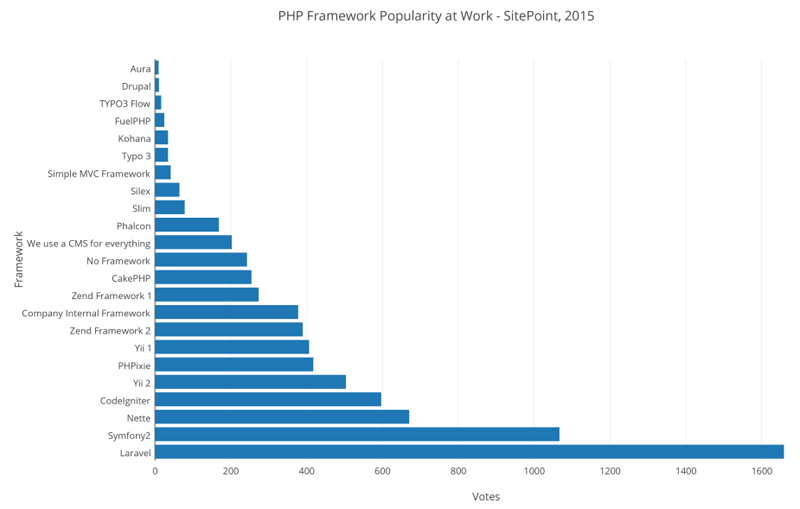 There is no denying to the fact it has established its prominence not only amongst, large, medium or small enterprises, but has become the first choice of startups too. The Laracasts keep on updating the versions and the Laravel 5.4 was launched on 24th January 2017. The new version comprises of Laravel Dusk, Laravel Mix, Blade Components and Slots, Markdown Emails etc.

Therefore, it becomes evident to discuss some of its compelling features that attract businesses to choose Laravel over others.

The Significance of Having Eloquent Object Relational Mapper (ORM)

The Laravel offers Eloquent Object Relational Mapper (ORM), a simple ActiveRecord implementation and the developer gets an opportunity to work with the database. As such you can enquire regarding the data with PHP syntax and you are not required to write a SQL code. Each table in the database has a corresponding Model. The advantage of having ORM according to most of the Laravel Developers is that it is much quicker than PHP developers.

Helps to Fix the Most Common Technical Issues

Laravel provides a robust security feature that helps to protect the web applications and combats the security threats such as SQL injection, cross-site request sham and scripting. It is a safe and secured PHP framework and so it has gained much popularity. The American Non Governmental Organization OWASP Foundation is of the opinion that codebases in this PHP framework is strongly guarded and a number of people can check it.

Development of Future Based Ready Applications and Open Technology

Now because the Laravel PHP framework keeps on updating its versions, you can be sure of creating future ready web applications to enhance your business prospective. It allows you to develop upgraded apps and the enterprise can also easily change their future business tactics all due to the presence of Laravel. In addition, it also offers scalability to the business firms.

And do you know why the Laravel application development services are cost effective. It is because it has an open source technology, which is free of cost.

One of the key factors which distinguish the Laravel from other PHP frameworks is that it has got the asset of Object Oriented Libraries along with several other pre-installed libraries. One such example of a pre-installed library is an Authentication library, which has its own benefits. One will come across features like Bcrypt hashing, prevention of CRSF, resetting of password, getting an access to the number of users and much more.

The online survey agency Sitepoint also informs that Laravel excels in the department of sharing the database to new members who join the team. The Laravel developers have provided it with this facility to conduct this job smoothly and also you can add columns manually to their local scheme. The scheme builder of Laravel helps in pairing the migrations to create the database. It is helpful in completing various projects.

The Benefits of Blade

Again the Laravel is blessed enough to have blade, which is a templating engine. The writing of codes becomes simpler as the user can use plain PHP code in views. Apart from that, it is extensible, a feature that other PHP framework does not have. The web application does not get any visual projection because of the blade. They are plain codes in PHP before getting stored and modified. It has its own conditional statements and loops.

This was first introduced with Laravel 3 but it had very limited functions. However, when the version was updated to 4.0, new functionalities were added with further made this particular PHP developer more advanced. The artisan tool proves to be a boon when you need to perform the complicated programming based tasks and most developers don’t want to do it manually. Moreover, it also helps in developing a skeleton code as well as a database structure and migration helping in to manage the database. You have the freedom to develop your own commands and make your job much easier. It allows you to perform the Unit Tests.

The Advantage of Performing Unit Testing

Yet another vital aspect which has compelled the developers and programmers to opt for Laravel is because of the Unit Testing. In fact, it has topped the survey for most preferred PHP frameworks, thanks to the systematic testing of the application and fixes all bugs before releasing the apps. The market has regarded it as one of the most stable launches and it also lets the developers to easily write unit-tests for own code.

The Laravel web development has been developed on more than twenty various libraries and is self categorized into single modules. It is also based on such PHP features which let the developers to create modular and responsive web applications.

As it has already been mentioned in the beginning that Laravel is based on Model View Controller (MVC) architectural pattern, it brings transparency between the logic and the presentation. This allows the developer to better the performance, documentation and in-built function.

We have discussed in the above blog why Laravel PHP framework is necessary for the enterprise. It has number of benefits and other sticking features which makes it the best framework amongst all the others. But above all, it makes the development of web application easier and given the apps a new outlook. The Laravel is growing in popularity and you can also augment your business prospects plying on it.