A PHP framework is the most popular web development platforms allows developers to build hi-end applications efficiently using its advanced and robust features.

There are several PHP frameworks used by PHP developers for web development such as Laravel, Yii, Symfony, CodeIgniter, Phalcon, Zoomla, CakePHP, Drupal, Zend Framework and many others. Each of them has its unique advantages as well as some disadvantages.

Deciding the right framework that works appropriately and meet your project requirements using its features become always a big challenging task, especially when you want to work on some big project.

When it comes all about web development in present times, the prime focus is the rapidity of development process with reusable, well-written and managed code with scalability.

With the use of proven PHP framework, it becomes feasible for developer to accomplish their complex project efficiently. Frameworks provides developers to use libraries, ready-made components, MVC architectures and many more helpful features to create highly secure and feature-rich apps. PHP frameworks offer developers an adequate solution to create a complex project from a scratch in a hassle-free manner.

Here, we would like to discuss about the two most popular PHP frameworks Laravel and Yii and its difference as well as to understand which one is best from Laravel and Yii. Even though both frameworks comprise excellent features, we have provided some differences between these frameworks helps developers to choose the right framework.

You should opt the one that justify your project requirement as well as expertise and experience using the selected framework.

Know About The Laravel Framework

Laravel is one of the most popular PHP frameworks comprises several advanced features useful for rapid application development. Initially released in 2011, its latest version Laravel 5.4 was released in January 2017 includes many excellent features.

It has a vast ecosystem with quick hosting and deployment platform. It owns a light-weight templating engine which is known as Blade. It includes a local development environment “Homestead” which is a packaged Vagrant box.

This PHP framework supports web applications using its exquisite and elegant syntax that help laravel developers to make frequent task easily such as sessions, authentication, queueing, as well as RESTful routing and catching.

Initially, it was meant to support high-end PHP as other frameworks like ASP.NET, Ruby on Rails, etc. This powerful framework can access easily and also integrates many robust tools useful in creating highly reliable and big apps.

These tools are easy migration system, great inversion of control and the integrated module testing system.

Yii is also a major popular PHP framework widely used all across the world. This open source, component-based MVC Architecture and object-oriented framework includes several features helps to boost the site performance as it becomes faster in comparison with other PHP frameworks. It utilizes lazy loading technique that makes it faster.

Yii is based on the Don’t Repeat Yourself (DRY) coding concept helps developer to organize logical and well-written code base. It comes with a set of features which are AJAX-enables and integrated with jQuery. It implements user-friendly theming and skinning mechanism helpful for fresher.

It gives many turnkey solutions such as multi-level cache support, NoSQL databases, ActiveRecord, as well as Query builder and several more. This scalable framework allows Yii developers to amend the source code of any section and also create your own extensions.

Comparison of Some Major Features Between Laravel and Yii Framework 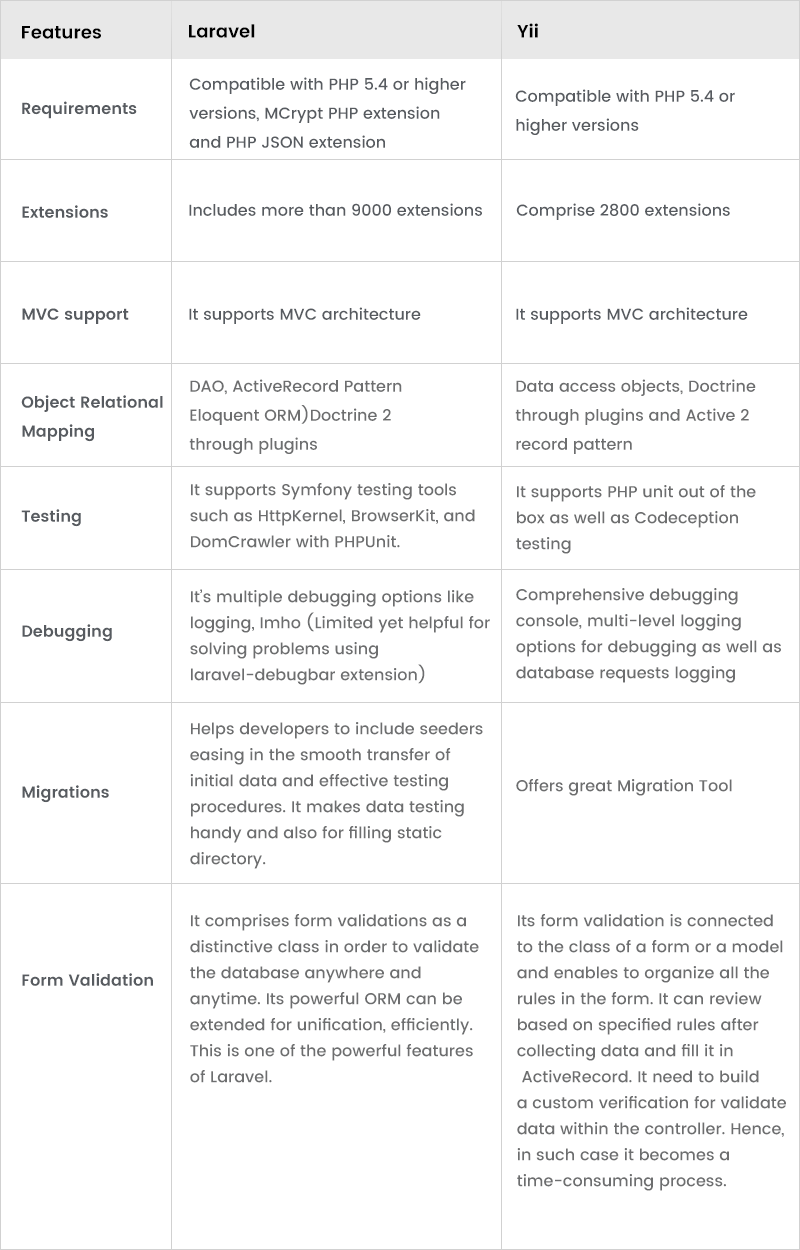 When it comes to security feature, both Yii and Laravel provide excellent tools to work using safety from SQL injections, authentication, passwords, as well as Cross Site Scripting and Cross-Site Request Forgery, etc.

In Laravel, there are no enough tools for accessing control, but with the help of several extension packages, it makes available easily.

When it comes to know the difference between Laravel and Yii, it becomes the choice of developers to decide which is the best? As Laravel comprises several excellent features including Templating Engines, large no of extensions, efficient testing procedures and many other for making the web development process faster and more efficient, it is growing as the popular choice of PHP developers.

Moreover, Yii also comprises powerful features and offers higher-level security, developers has to choose the framework based on the significance of features in the project and know-how about the framework.