Mobile applications have brought a drastic transformation globally enriching the lives of the individual users. At the same time, it has provided ample scope to the developers to showcase their innovativeness. The mobile app technology has taken a curvature that is beyond imagination. 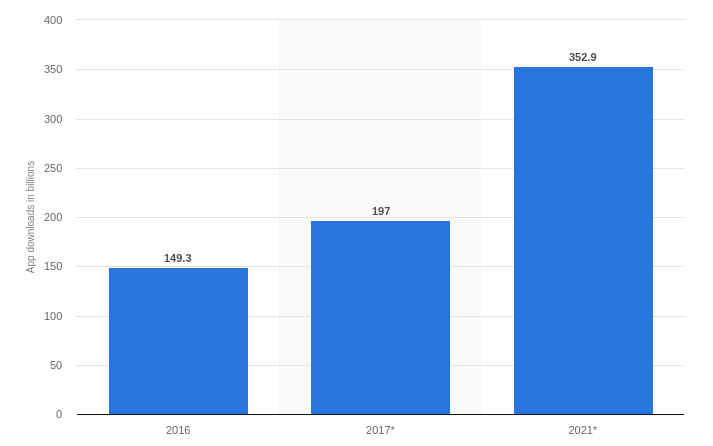 If we present a few data and statics to prove the statement that would be substantial. According to a study the total number of downloads in the year 2016 was 149.3 billion and it is expected to go up to 352.9 billion by 2021.

There is nothing wrong in the statement if we say that people have become addicted to mobile apps. According to a reliable survey the people in United States spend 9% more time on browsing the mobile apps in comparison to the websites.

Another report states that each of the users usually spend 2.3 hours on an average daily navigating the various mobile apps.

Now all these figures and facts presented is a clear cut indication that app development industry is passing through its golden period and its demand is expected to go higher up the order.

The era of mobile apps is rightly said to be the age of digitization where communication has become faster and simpler than ever before. One of the primary reasons that is evidently led to better interaction and connection is the deep surge in the number of social media apps.

According to the survey, Facebook has been identified as the most popular app (81%) on both the leading operating systems i.e. Android and iOS. In fact, it has also been seen in the same study that 29% of the users spend most of their time on social networking apps.

Not only the social networking apps eased out the process of communication, but it has now regarded as one of the most effective tools for business promotion and advertising. Similarly, Whatsapp has become one of the fastest growing social messaging app with over half a billion people already using it.

Even there are many business groups active on Whatsapp, where people are buying and selling their goods.

2. The Rise in Demand for Efficient App Developers

The increasing demand for useful and innovative apps both for the Android as well as the iOS platforms has also created an exceptional opportunity for the talented app developers to showcase their caliber and creativity.

Therefore, most of the app development companies are in hunt for efficient app designers that can prove to be a great asset for it. And the numbers suggested by the US Bureau of Labor Statistics give a positive sign in this direction. It has predicted that number of developers will increase from 17% to 24% by 2024.

So, you see new job opportunities are coming your way and you need to get prepared to grab it with both hands. It must be noted that within the near future, the companies are not only going to hire best Android and iOS app developers, but also look for proficient who expertise in Enterprise apps and IoT apps too.

3. The Immense Success of eCommerce Business

One of the probable reasons why app development has gained the impetus is because the eCommerce business has become more gigantic. It increased to 174% in 2014 itself and the number of users are growing steadfastly.

The enormous success of mCommerce has even the shook the retail industry to a great extent and most of the retailers are searching for the app development firms to get an eCommerce app that can potentially get more customers and augment their sales.

The popularity of the sites like Amazon, EBay and Flipkart tells you the story. More and more people are preferring the online shopping sites for making the purchase mainly due to the fact that they are readily available round the clock and are most convenient option to choose.

The demand will keep on mounting because of the fact that apps will generate higher revenue for the business.

4. Mobile Apps a Blessing for the Startups

If you think that mobile applications are business strategies that fit within the shoes of only established companies, you must check the background and success record of new entrepreneurs and their ventures.

At present, the work circumference of the app designing firms have enlarged as they are also helping out the new business enterprises to establish their foot in the steep competitive market.

The success of Uber and Airbnb can be forwarded as the best examples to support the statement. It is through the Uber mobile application that almost all the customers book a cab for a destination and many few for the website. So, the demand for the mobile app development is certainly ascend within the time to arrive.

We all know that mobile apps have exploded into the market because there is a flood of highly advanced devices. Every year new Smartphones are getting launched, which have more futuristic features and it is getting better and better by the day.

For instance, this year witnessed the arrival of iPhone X and iPhone 8, which is class apart from its current contemporaries.

And since people have become smarter they always keep the features on the top of the priority list when they are downloading any app. Google’s Android O and Apple’s iOS 11 are the indications to it.

Not only that when the most popular and downloaded app like Whatsapp is adding new features to enhance the experience of the customers. So, one can say that as the number of devices and features will boom, the demand for app development will also flourish.

6. Developing Apps will be Budget Friendly

Another benefiting reason that will pave a positive signal for the app development is the fact that getting apps developed will be affordable and budget friendlier.

The experts tend to believe that app building will no more be considered an item of luxury and remained to large business organizations.

There are a few app development companies that serves the client dedicatedly without pinching his pocket. You can also opt for the custom made apps.

In fact, building a mobile app is more reasonable than getting a website designed. Therefore, people cannot afford to get their websites developed, will surely root for the app development firms. This again proves that app development will continue to rise.

7. The Growth of Enterprise Apps

According to Gartner, the growth of enterprise apps in the current scenario will have a positive impact on the high demand of mobile app. He estimates that by the end of this year the demand for mobile app development will increase five times.

And with the numbers of devices also soaring up, the enterprise apps will need the assistance of consumer apps to give its optimum performance.

The mobile app development industry today is no doubt the most promising and prospering business where apps are being designed at large and launched almost every day.

Most business organizations and even the startups including the retailers have understood the fact that if they want to maximize profit and take their business to the next level, then getting a mobile application is as necessary as investing capital into business.

The smart devices are also playing a pivotal role in taking the business of the app development further up where there are lots of challenges for the app developers. So, if you are an app developer, then it’s time to upgrade your skills to counter the competition.