Gone are the days when people used to glue at a television set to watch a live cricket match or a movie and a living room would get converted to a stadium or a cinema hall.

But all the attention and attraction that the cable television had obtained more than a decade ago seems to have lost its vigor; all credit to the arrival of a new guest in the form of a live streaming video app.

What is more exciting is the fact that you can enjoy your favorite movies and other shows without any hindrances, which means they are free from commercials.

And let’s be clear. The live streaming video apps are not just meant for fun and entertainment purposes. It can be handy for business as well as for personal use.

For instance, it can prove worthy in the case of live video conferences, offering live tutorials for students and any other demonstration, impart training lessons, useful in culinary classes, and lastly act as a safety device to keep an eye on children or pets.

Ever since the video streaming or live streaming apps have bagged the limelight, there has been a sea of such apps in the market. According to the statistics presented by Uscreen, In March 2020, 22% of individuals in the U.S. and U.K. started streaming more live video since the pandemic.

Similarly, the site also states that live streaming events increased by 300% between March to August 2020.

The Two Categories of Video Based Apps

Now before you begin your job of creating a live streaming video app, it is imperative to know that video apps may be categorized into two different categories namely:

As the name implies these video apps are created for live broadcasting that allows the user to view a live concert or match etc. The live online broadcast videos are only available to those users who have subscribed to a specific channel in real-time.

The storage duration of such videos is short and they are removed or deleted afterward.

In the second case, there is no such time limitation as far as storing the video is concerned. This means the videos are stored in the app’s server in advance and the user can play it according to his wish and convenience.

Composition of the Development Team

The development team involved in a project usually consists of the same professionals usually included in any app design. The project manager manages and supervises the entire project and designates the role of other members.

Then comes the app developers who have experience in Android and iOS app development. The important contribution of the UI and UX designers, the backend team members and lastly the quality app testers can also not be denied.

All these people play their decisive role in the successful making and launching of a live video streaming app.

Things to Consider Before Developing a Live Video Streaming App

As a developer, the following things to be considered when you commence the project:

Accessibility to a Large Number of Audiences

The above-mentioned stats has already provided ample evidence regarding the increasing number of subscribers to the live video streaming apps. So, you have to create apps with a highly accessible backend that can cater to a large number of audiences.

Should Support all Video File Formats

The live application videos streaming in your app should necessarily support all types of file formats so that the user can run his video seamlessly without any problems.

There is always debate over pirated or plagiarized videos which often leads to the infringement of the copyrights. Therefore, the developers need to ensure to provide adequate security to the apps to avert such situations.

Once you have got the important tools in the right position, you can begin the work of app development.

Selection of a Viable Platform

First things first, what needs to be done is choosing the appropriate viable platform for the development of the application. The knowledge of Minimum Viable Product (MVP) will be helpful during the early stages of the designing process.

An application is mostly built on either a native or a hybrid platform, and so this is the initial option to choose from.

As for the hybrid platform, it will support various languages such as HTML, JavaScript, etc. If you want to create your live video streaming app using a native platform, then it is recommended to first select the specific Operating System – Android or iOS for which the app is getting developed.

The Features to be Implemented in Video Streaming App 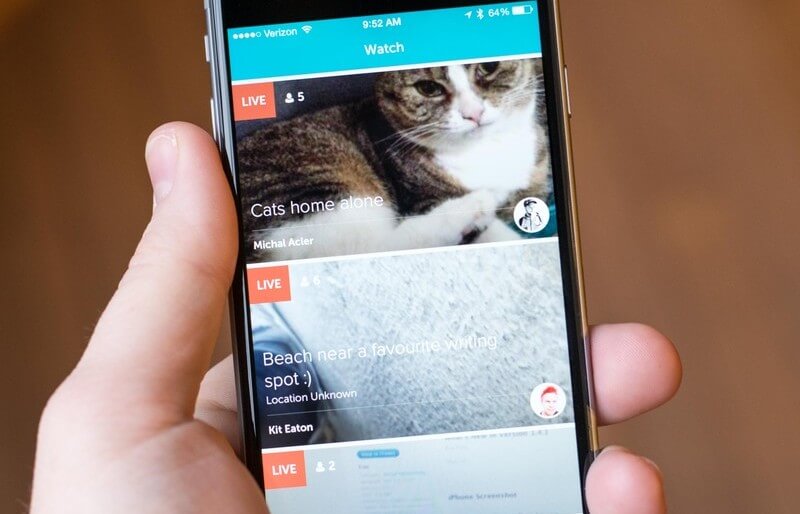 After you have chosen the right platform, it’s time to proceed further with the journey.

The user registration is the first basic requirement when the customer is rooting for live streaming video apps. He has to be provided with various options to register his account. The options may include registration through email id or mobile number using OTP verification.

Having a useful inventory that comprises personal information about the user is always helpful. So the next job in hand for the app developers is to create a platform where the customer can fill in his profile that would include his name, email id, mobile number, preference of video genres such as sports, movies, etc. subscription list and all.

The app developers necessarily need to add a search box in the app that allows the users to search for a particular video in a specific category.

Now the search category needs to be a little wider. It should be based on the interest, the age factor, location, and language of the broadcast, the number of total views, and so on.

You know very well that the popularity of the video increases by the number of persons watching it and also providing their valuable feedback in the form of ratings and comments.

The user provides feedback not only on whether he liked the video or not but also on the quality of the video and if it ran smoothly without buffering.

Read also: The Most Valuable Tips to Get 5 Star Ratings and Reviews for Your App

Today in this age of the internet, ambiguous videos become as viral as a fire in the forest. How is that possible that one such video gets viewed by thousands within a few minutes of its upload?

But every user wants to maintain some privacy as far as sharing of the content is concerned. So, keeping that view in mind, the app developer has to offer some privacy-related settings. A user can choose with whom he wants to share the details and not.

Since you are developing apps for live video streaming, the addition of geo-location tracking becomes essential. It helps to trace or find the location of the broadcast. One can cite the example of Facebook Live that allows the user to know the current location of his friend.

Until now we had some discussion on what needs to be included by the app developers from the front end of the screen. But now let’s get into some deeper details about the technical aspects and server.

One of the steps that you can take to keep traffic boosting into your app is implementing the Push Notifications.

You know that if a user likes a particular video category, say International and Trance Music, he would certainly wait for the next uploading of the video that he can listen to.

So, if he is subscribed, you can send him a notification informing him that the new video has arrived and uploaded.

The Process of Video Streaming

We have already talked about the two kinds of videos i.e. the one that is meant for live broadcasting and the second one for streaming.

One is also aware of the fact that live videos cannot be stored on the server. The server can convert the video and then it gets transmitted to the number of subscribers.

Now let’s have a closer look at the process of streaming. At the onset, the broadcasting video starts getting converted by the server, and then it is made available on the user’s app.

In the meantime, as the video is getting uploaded it gets stored for some time depending on the storage capacity. As soon as the time lapses, it will automatically be removed.

In case the users want to store more videos, they will have to be provided with a much larger storage facility.

The app developers can take support of the cloud server in this regard. It must be remembered that the size of the server largely depends on the number of users.

Not all live videos can be watched free of cost. There are a few particular videos for which the user has to pay money for subscribing to it. Therefore, the addition of the payment gateway option for making online transactions is also a key aspect that has to be developed.

You can go for PayPal or Braintree. You can also incorporate the option of credit and debit card.

Playing with the App Design

This is one crucial area where the UI and the UX designers will play their significant role in icing the cake of the app. Their aims should primarily be providing a comfortable experience to the user while he is watching the video.

The user can increase or decrease the size of the screen, improve the resolution or quality of the video, and get a crystal clear picture.

The app designers can make use of the wireframing so as to get a perfect design. It also secures the app from becoming bulky and sluggish.

So, How Much the Cost of Live Video Streaming Apps Would be?

The discussion would rather be regarded as incomplete if we don’t touch the pricing section of the Live Video Streaming Apps after getting through the development process. And after reading the blog you also wish to be familiar with that particular aspect.

An approximate figure in this regard can be starting from $12,000 USD and the final cost may depend on the total no. of components required to build the complete mobile app.

Server and any third party cost are not included in this price. Server price may be defined based on the server bandwidth, number of the targeted audience, etc.

Live Video Streaming Apps are the order of the day. Today people remain connected with the happenings of the world around not through television sets, but via these wonderful apps. And these apps are not sources of entertainment but also providing valuable information and taking businesses forward.

In the next few years, the demand for such apps will further go up and so the app developers should also find out new innovative techniques to make things more interesting for the end uses.

It is also true that a number of industries such as entertainment, sports, coaching institutes, and others will have a great influence of such apps in the future.

So, think more and steady your steps in finding and getting in touch with the best App Development Company to get your live video streaming app at the most affordable prices.