What is it that draws the attention of the target audiences towards a mobile application? Well, people may have various opinions on this; while some may prefer a unique feature-loaded mobile app, others might give preference to exclusively designed User Interface and User Experience.

Whatever may be the fact, the app designers have to offer a seamless experience to the end users.

However, the design of your mobile app is likewise important. According to another statistic, 94% of the first impressions are related to designs. Therefore, you can well understand the significance of User Interface and User Experience while designing an app.

At the same time don’t mix and match User Interface with User Experience. Although they might seem to be similar, they are poles apart.

User Experience is purely based on enhancing the satisfaction level of the customers and it mainly focuses on offering optimal usability and better access to the app.

The UX helps in creating a brand awareness and the users tend to identify the products with the help of UX design.

But we are here to discuss how to create an awesome UI design for mobile app that can appeal to the large number of audiences. User Interface is an indispensable tool, which draws the user towards the app.

User Interface or UI aims at improving the user interaction through simple and sophisticated designs. In short, the goal of the UI designer is to create user-centric designs.

In fact, you can also say that the success of User Experience relies on how well and efficiently the UI has been designed.

The UI is not restricted to just designing a few eye-catching buttons and making the navigation simpler. It is about how well the user can get connected with the app.

So, you the UI designers not only have to pay attention to the aesthetic beauty but also emphasize on the app functionality. You have to make the app user-friendly and think about various aspects of designing such as placement of the buttons, call-to-actions etc.

So, what are the inputs that need to be put so as to make an appealing UI? Let’s have a brief discussion:

1. The UI Designers Should Focus on Clarity

One of the important aspects that keep the UI designers on their toes is adding the visual elements to the designing process. They seem to be concerned about how the app would look finally; because their aim is to establish the connection with the user.

How about offering a clear shape to the app designing? Well, this is important if you want to enhance the brand awareness.

The interface should not be perplexing or confusing but on the contrary, everything should be clear. Avoid adding the element of ambiguity and make the language easier. Try to keep the design as simple as possible.

Do not overcrowd your app with the bunch of unnecessary words. This will not create a positive impact as far as interface is concerned.

2. Make Use of Familiar Buttons or Call-to-Actions

The UI designers want to implement unique buttons and icons when it comes to designing the interface.

There is no harm in doing so, but you also need to remember that trying out too many things at the same time can lead to hampering the design.

Create buttons that are easier to understand such as choosing the red color for the delete option.

You need to keep in mind that if somebody is using your app for the first time, he should be familiar with the call-to-action keys.

3. Speeding Up The App Performance

The app should have a good navigation speed and should not lack behind. It must be noted that according to one of the surveys, 53% lose their interest in the mobile app due to slow speed.

It also creates a negative influence on the performance of the app. You can ask for a feedback even if the screen is loading. This will keep the users informed as to what is happening.

A highly responsive app will run seamlessly on different operating systems such as Android and iOS and on various devices.

The Font play a crucial role in deciding the fate of the interface whether it is website or a mobile app.

So, the UI designers have to take clear stand while choosing the font for the app; both in case of style and size. Don’t go for very stylish fonts that are difficult to comprehend. 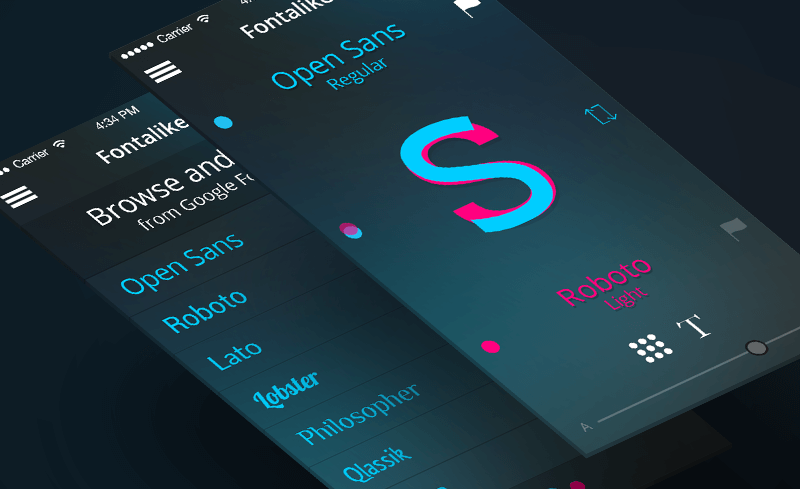 In addition, the size of the font should match with the interface design as well as the background color.

It must be appropriate; neither should it be too small making it difficult to read the content or large so that you face the difficulty in adjusting the entire content.

5. Making it Aesthetically Pleasing is Important

It’s good that you are trying your level best to implement the best features and functions into the app; however, your app also need to be aesthetically pleasing to the target audiences in order to attract more.

In order to achieve that end, the best way is to incorporate some animations if your app demands so. We know the trends are changing and today the static images and animations have been replaced by the motion pictures.

This is one little trick that the UI designs can employ to enhance the performance of the app.

Moreover, you can also keep your word of implementing something unique. This is where you can take full advantage of the CSS in giving life to your user interface.

The UI designers have to make sure that they are up-to-date with the latest trends related to mobile app designing. The trends keep altering and so nothing is constant.

If you are not following what’s currently prevailing in the market, your app will lack behind in the stiff competition and there is no other way that you can come forward.

Read also: Don’t Miss Out on the Popular Mobile UX Designing Trends of 2018

The UI designers should also take a keynote of going for the beta testing once they have completed with the designing process.

The beta testing is essential to get an idea of how the app design is working and if there is anything that needs to be addressed.

Don’t think that your app will become successful soon after its release. You can put it in front of the users to take the decision if everything has fallen into the right place.

So, we have seen how the UI designers can create an awesome User Interface design and immediately grab the attention of the mobile users.

It is easier to design a mobile app but when you are implementing some extraordinary techniques, you are actually coming out with a great product that is very useful to the audiences.

Having said that you should focus on offering simplicity while making the designs attractive.

Looking for an experienced UI/UX designer? Get in touch with Us today.

Ketan Rajput is a design team head at MindInventory with expertise in UX/UI Design for Mobile and Web, Graphic Design, Illustration, Motion Graphic, Animations as well as in front-end web technologies such as HTML, CSS, JavaScript.