Due to these robust features, Unity 3D has become a popular option among developers seeking to build exceptional, easy, and affordable 2D and 3D game designs. Before discussing the reasons for choosing this high-quality game engine, let’s know about it briefly!

A Brief Introduction to Unity

Unity, founded and launched by Unity Technologies, is well-known as one of the high-end game engines. If you are a game developer, you can easily use it. Due to its alluring design, Unity has made a massive fan base responsible for the engine’s growth.

With Unity, developers don’t need to switch between platforms. After all, Unity gives the convenience of coding game commands also. In short, this game engine lets you create high-end and fast games.

Here is some statistical information about Unity:

To explain why Unity is well-known in the gaming industry, here are the key perks of this game engine discussed below:

Unity is more convenient to use as compared to other technologies. Other tricky technologies become more complex while used.

Unity has compatibility with multiple Operating Systems, such as Steam, iOS, PCs, Macs, Android, and consoles. Hence, using Unity, you can quickly build many games for different platforms and design multiple game stages.

Every game stage has some vital elements, and Unity helps you shift them to the next phase and make the game more exceptional.

The most convenient fact about Unity is that many training videos and tutorials are available online for every learner. You can even develop easy and small games with training using Unity.

4. Availability of the Rich Asset Store

Developers can easily purchase essential assets without making these on their own. The Unity asset store also provides the opportunity for musical artists, craftsmen or modelers to earn more money.

Some of the most popular multiplayer games are made on the Unity engine. The platform offers many features that encourage developers to build high-end games for online players. Unity 3D makes the whole game development process fun and simple.

Unity provides uninterrupted assistance from the team of developers. More than 2.5 million developers currently use Unity programming, and the number of users is increasing fast. The feasibility of sharing the client’s approval or disapproval with the development team is simple, and it can fix issues very quickly.

Unity is available in both free and pro versions with numerous features. You can select the free version and receive the highlights of the primary elements. Furthermore, you can use the pro version to build high-end games using features like feature playback, 3D composition booster, sound channel, etc.

If you are a budding developer, you can use the free version and make your ideas come to life. But if you seek additional features, go for the pro-business plan.

You don’t need coding experience or knowledge to use the Unity game engine. Unity is feasible for beginners who want to start game development as a hobby or career. It uses Boo, JavaScript, and C#, but you can build a game without code writing.

Changing and debugging is simpler and more convenient with Unity. After all, you can see every game variable during gameplay. Unity is extraordinary because it helps developers debug the process at runtime.

What are the Limitations of Unity Game Engine?

Apart from some unique perks, the Unity game engine has some limitations also. Let’s shed light on a few of them!

1. No Link to External Code Libraries

Unity doesn’t support links to external code libraries. It is discouraging and unexpected for professional programmers. If you want to use a library, you must copy it manually into the project instead of just connecting to a shared folder.

The inadequacy of one folder with libraries makes it hard to use the activities of various projects. And rationally, using version control systems overpower this inconvenience, but there is no instant fix to this issue in Unity.

Developers must get licenses for the best functionality improvements, deployment, and graphics. These licenses are very costly.

Unity features a search function to discover linked scripts; however, it could be unique. You often need to browse all elements manually in a scene to get related scripts. Nevertheless, you must avoid this time-consuming task.

How Can MindInventory Help you with Game Development?

At MindInventory, we specialise in mobile game development for a variety of industries using the Unity 3D platform. We have a team of professional graphic designers, developers, testers, and modelers who allow us to maximize our levels of expertise and skills in game development, artwork, level design, creative tasks, testing, and production.

It’s better to contact us as we have all the tools, experience, and expertise to carry out the task. We have been in the mobile game development sector for many years, and in these years, our organization has developed many games using Unity. Therefore, if you seek to build a game with Unity most efficiently, MindInventory can be a suitable option for you.

Although there are some confinements, most game development companies consider Unity Game Engine the best gaming development platform. The perks discussed above also explain the same.

Is Unity a good engine for 3D games?

Unity 3D is the most popular game engine in the market because it works across multiple platforms and is highly user-friendly to both beginners and experts. It allows users to build 2D and 3D games, as well as a variety of other benefits for gamers all around the world.

Can I build game in Unity without coding?

Yes, you don’t require coding experience to build a game using the Unity game engine. Unity uses Boo, JavaScript, and C#, but you can create a game without code writing. 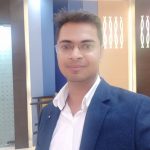 Ankit Dave is a Game Developer with 5 years of experience in 2D & 3D Gaming/Console Gaming/AR/VR/Machine Learning. Requirement understands, create a GDD , create an architecture of the game to make them as scalable as possible, deploy the games on various platforms.